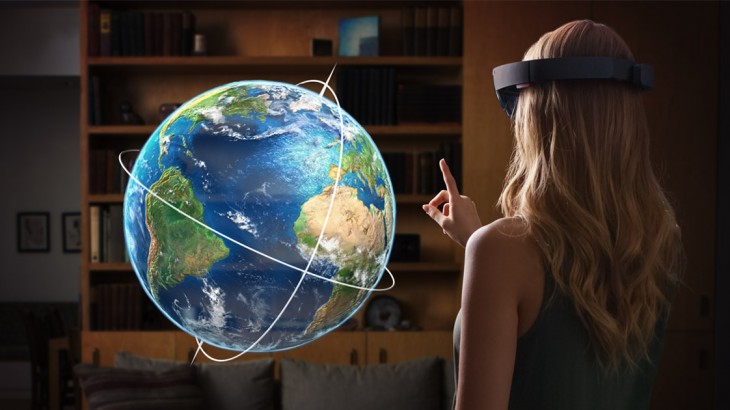 A mixed reality is a concept that involves both Virtual and Augmented Reality. Microsoft HoloLens is based on that concept. The device is a holographic computer that is build into a headset enables the user hear, see and interact with high-definition holograms in a real space such as office or a living room. The device runs Windows 10 since it is the first and only OS at present which supports gaze, gesture, voice commands for the input. The device doesn’t need to connect with the computer through USB wires, bluetooth or any other wireless means. It works independently.

The users can re-size the holographic objects and place it wherever they feel comfortable, even by the help of one’s own eyes. Yes, the holograms are responsive in nature and can sense the user’s gaze, gesture and voice and follow the command accordingly. The users can also “air-tap” the objects which implies inputting through tapping in the air on the virtual objects. The virtual objects could be anything based on your ideas and imagination and are seen by you only. It is possible to show your ideas to others and see other’s ideas too through specific commands and settings. The idea was to work beyond digital world that is confined to having just screens and pixels with a touch-screen over a physical device.

Microsoft’s HoloLens are mainly developed for the developers, builders, engineers and science enthusiasts who are into the field of inventing or making something practical. For instance, if you are an architect and plan to design an apartment and all its interiors, you may design through HoloLens and visualize the holograms through every angle about what design would appear like, whenever you think of something. This will enable you finalize the architecture as a whole. If you are a mechanical engineer and are planning to build something new which is useful to mankind you can visualize your idea and work accordingly about the structure and function of any machine.

HoloLens has high definition lenses and spatial sound technology to make an outstanding experience. The lenses are able to fit with most glass frames if you wear the spectacles. Microsoft HoloLens has advanced sensors being used for capturing information about what a user does and his environment. It also has built-in speakers through which the users can hear the sound even if they go to a different room.

HoloLens is available only in U.S.A. and Canada, and supports only English language at this point but the cost is significantly high. Spending as much as $3000 isn’t worth for personal purpose, unless you are a stubborn scientist and have plans to invent many new things in the coming future.