Google’s I’m Feeling Lucky button – What does it do?

Whatever Google launches is always discussed literally everywhere, whether it’s a doodle, new SEO norms, home page or tabs and buttons. It is the most powerful search engine among all but most people fail to know its every feature. I’m Feeling Lucky is one of the search buttons that it has since the year 2012. Everyone is familiar with it but usually don’t get it why it was introduced at the first place. One sees it right below the search bar at the right hand side of “Google Search” button.

When someone used to type any keyword or a group of keywords and pressed the Google Search button, he or she would get the appropriate search results according to the keyword they just typed. If they would press I’m Feeling Lucky button they were redirected to that page of the very first result. This means that when we search for something we get to see the 10 results on the first page by default. The result which is sorted above all is the first filter taken out from the Google’s database. After typing the keywords if a user presses the latter button instead of Search, he or she was going to be redirected to that website which was the first filter. This was most useful in case if someone typed the keywords like Facebook, ICICI, Instagram, YouTube, Pinterest, etc. because the users were directly taken to the respective official websites. 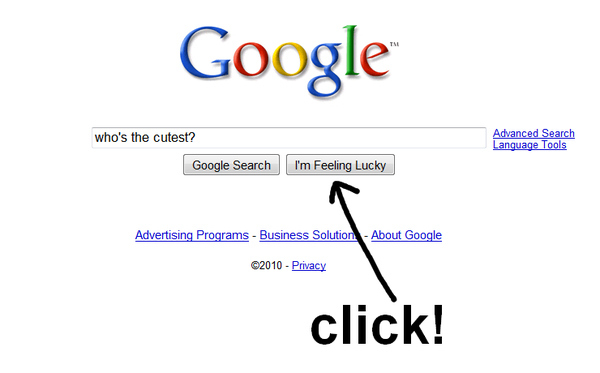 The button doesn’t have much significance after the Google instant was introduced because once the user types the initial letters or words the instant shows the options just below, that could be his/her field of interest or that phrase that they are about to type the next moment. This makes everyone’s life easier. By default the Google instant is enabled but through the settings one may turn it off. After turning it off the I’m Feeling Lucky button works exactly the same way as it did previously. If the instant is still on and you clicked this button you will now be redirected to Google Doodles’ page where the history of Google Doodle will be shown right from the beginning that what was introduced when. If you click one of these options you will be shown the brief history and some small description just below the main title.

Google knows how to maintain its users’ interest. As the time passes, the button may become part of history and there is a possibility that Google pins it down from its home page. But no one actually knows what is going to happen in the coming future. So, for now let’s live at the moment and enjoy Googling with its playful doodles!