Freedom 251 – Why would a smartphone be so cheap?

On 18th February, 2016 when the news headlines were storming with world’s cheapest phone, everyone went curious and crazy at the same time. Many were skeptical as well. This is because being in the technology market no one was convinced that the hardware and software materials would be that cheap, despite of the deduction of various taxes that a common man has to bear. Yes, the founder of Ringing Bells Pvt. Ltd., Mohit Goel has this marketing strategy! 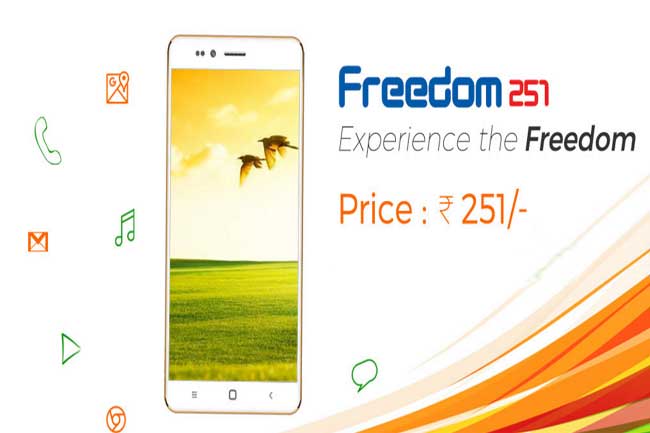 Most individuals thus has speculations that the government might be funding because it is under the Make in India‘s and Digital India‘s project. But Ringing Bell hasn’t confirmed it yet; nevertheless, it denied all claims. So, why is it doing so? Is it gaining anything? Let me highlight some of the hard core facts till date.

The launch of the product had the motto of gaining public attention on large scale. Of course we rely more on firms like Samsung, Motorola, Apple, Gionee, Oppo, etc. Even if we prefer the cheapest ones it would be no less than 1500 INR. So, if an individual is new and wants that his company is preferred over others, he has to take a big risk. After all who would buy a phone worth 1500 to 2000 Rs. that belongs to a brand we never heard before! We would prefer Samsung instead, isn’t it? Now the thing is suddenly it gained a huge popularity that every other person would want to know everything about it within just a day. Even BBC, Time and Forbes had covered an article about it. The number of customers pre-ordered this handset and the frequency significantly rose. The website server ultimately crashed on the first day only. It then recovered somehow later.

Goel had to bear the loss of Rs. 930 on each handset because buying the materials from Taiwan and its entire making costed him Rs. 1180 for each cellphone. Around 700-800 Rs. were recovered by app developers and revenue generated via Ads and so the loss is reduced to Rs. 180-270 per handset, which is still a loss! The maker promised that he is going to refund the money of his first 30,000 consumers because they didn’t get to receive their product yet. He announced that people are now provided the facility of Cash on Delivery (251 + 40 Rs. Delivery charges) so that they don’t feel like looted in the meanwhile.

And it is not the end. There is a huge cry among people that this project is a fail because certain evidences support that something is wrong. Let’s discuss everything based on the real time experiences of end users who uploaded images and screenshots.

1. The handset resembles iPhone. It seems that it has copied the older version of Apple’s handset. This also includes the icons that it displays. The makers also countered the allegations with a reply “Apple does not have patents over their designs”. Apple obviously has its patents but not in India.

Actually the thing is the patents are country specific. If a company has its patent approved in United States cannot sue another company residing in some other country unless it has its branch in USA itself, no matter how much resemblance it has. This is the reason why China always carelessly copies literally everything and never got sued. Samsung is a South Korean company but it was heavily fined because its branch was in U.S. also. Ringing Bells is making its phones for Indians and so there is no chance of getting prosecuted.

2. The handset originally belongs to China’s Adcom. The cellphone is the product of Adcom, a Chinese firm. What’s more ridiculous is each handset has the logo ADCOM clearly written on the top but is hidden using a whitener. After scratching a number of times a user posted the photo clearly indicating its original manufacturer. They also say that the images and videos of the handset being circulated are simply prototypes and not the actual identification. But this cannot entirely falsify the claims being raised. Ever heard of Nokia or any other mobile company doing that?

3. Not Make in India literally – Since it is clear that the handset is a Chinese product and along with that its chipset too is imported from Taiwan, we cannot say that everything is made in India for now. Also there isn’t any involvement of the government but just a few ‘guidance’ and ‘vision’. The government showed interest in this project and made it a brand ambassador and that’s it.

4. No Bureau of Indian Standards certification – Till date the company hasn’t confirmed that it is a certified firm under BIS. Without certification why should a customer rely?

5. Website doesn’t always work properly – Many people have claimed that once they clicked the button “Pay Now” they were again redirected on the homepage. Initially for many months the FAQ page wasn’t ready that was supposed to be there before planning for the product’s launch. Can you believe that the website was launched just a week prior to the product’s launch? The QTY section while ordering for a product could also be altered to decimal digits or even negatives! It also added  the Antarctica in its list of countries.

Only the time will speak whether this heightened ambition would be able to fulfill its promise or not. But it still needs government’s intervention and investment of about 50,000 crores if the customers’ criterion of reliance has to be initiated and maintained, according to the Managing Director’s (as well as owner’s) statements. This amount is really huge. After that it could launch other devices (handsets to be specific) as well. If a merely new company suddenly conquers the market it is really painful for many other competitors because they haven’t gained overnight popularity. But we all know how much an overnight popularity lasts, especially if it is new to the market and have very little experience as compared to other counterparts.