The Downfall of Nokia – What went wrong? 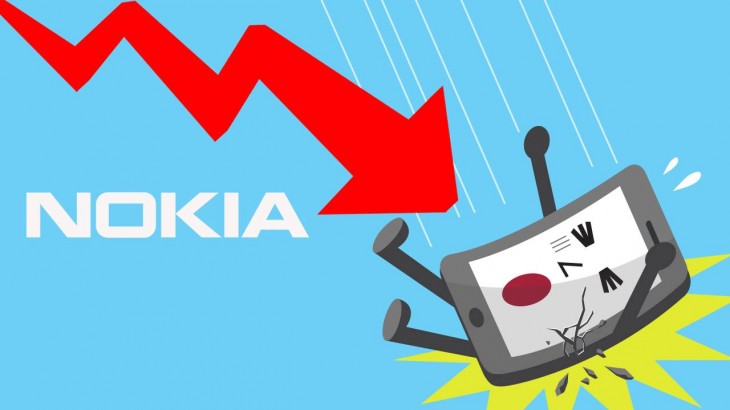 There was a time when Nokia ruled the world when it came to cellphone industry. The era changed the moment the users started using Android smartphones and actually started liking those handsets. It felt difficult and equally risky when those were introduced for the first time since Nokia dominated literally everywhere and beating that renowned brand wasn’t a piece of cake; but android smartphones successfully shifted public’s viewpoint from old to new handsets within the first few months. The statistics show that despite of world’s leading brand, covering for more than 50% back in the 1990s and early 2000s, it dramatically reduced to little as 3% in the year 2013.

There are many estimated reasons. First and foremost is the very obvious – Introduction of Android and Apple phones. Initially people weren’t accepting the concept of touchscreen since their mind was dominated by physical keypads and accepting the ‘change’ seemed tricky both for consumers as well as marketers. One could say this as a revolutionary change in the field.

Nokia was basically more into hardware than software. It did not give importance equally to both of its type of engineers – Hardware and Software engineers, unlike Apple that always pays attention on every department since beginning; despite the fact that Nokia invested lots of time and money on research and development it still failed to realize what consumers wanted. Android started dominating the market but Nokia was in illusion still that consumers wouldn’t accept the changes. Nokia was reluctant towards making a change. Its Symbian operating system was out-of-date and it needed to shift to other operating system which wasn’t possible due to the requirement of lots of investment. Starting from the core was impossible and shifting from Symbian to Android was like insulting its own creation. It had lots of bugs that needed to be fixed. The introduction of every new version of its OS didn’t help either. It finally decided to get sold to Microsoft in $7.2 billions. 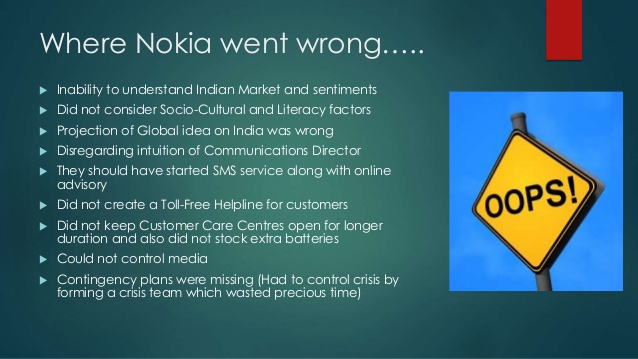 Microsoft, on the other hand, tried its hands on keeping its legacy of Windows on Nokia phones as well but these couldn’t stand a chance in front of already introduced Android. Windows still dominate when it comes to desktop computers but in the mobile industry it is the Android and iOS that get updated every year with even better solution. Nokia did introduce the touchscreen but it failed to deliver good processor that allows multi-tasking, plus better RAM and hard-disk. Introducing internet on mobile phones wasn’t a new thing to Nokia as well but it could not deliver proper display of webpages. This part cannot be entirely blamed on the handset itself but also the network bandwidth which wasn’t friendly either.

Many Nokia handsets had issues with connecting to WiFi. Also Android provides the facility of switching off the internet whenever the users want so that unnecessary balance isn’t taken away if not recharged for special internet plans. In the case of Nokia, it was mandatory to allow internet running 24/7. This made everyone having recharge his/her phone every time the internet plan expired. Likewise, there were many other bugs as well that weren’t resolved ever.

Nokia was overestimating its brand value and thought it would survive the downfall but it had no idea that it would be gone forever. This all happened because of their disinclination towards accepting the latest technology. Had it been practical enough and took risks for its own betterment, other brands would not have made this far, with much visionary attitude.